More information will be available in the very near future. If you would like more information please contact Carl: 0404 89 89 47
c_rathus@hotmail.com

I will be playing twice during this period.  From 1-2pm I will be support Master Kojima, our great resident calligrapher.  I will provide background music as he produces his beautiful kanji.

I will then play solo shakuhachi from 2.15-2.40pm.  This will be a mixture of Chikuho and Yokoyama lineage honkyoku.

Masterclass
The Masterclass is open to all.  Shakuhachi players of all levels will benefit enormously from attending the Masterclass. Five students have been given the chance to play and receive feedback from Kakizakai sensei.   Each student will play for about 5 minutes, and then, Kakizakai sensei will have about 10 minutes to provide feedback, advice and so on.

I’ll be accompanying an aikido demonstration from 5.50pm to 6pm, and also a cultural show of ikebana, kimono dressing and tea ceremony from 7pm to about 7.30pm.

Other performances include taiko and various forms of Japanese dance.

More information will be available at the  Brisbane City Council website.

More information, registration forms, etc can be found at: http://www.shakuhachi.org.au/

This is part of Japan Week, organised by the Japanese Consulate. At this stage I have a slot of 10-15 minutes at 1pm. Takako Nishibori (koto) and others will perform for about 30 minutes from noon, and the taiko group, Tkoko-Ton, will perform from about 1.30pm. These times are subect to change. I’ll post any changes. 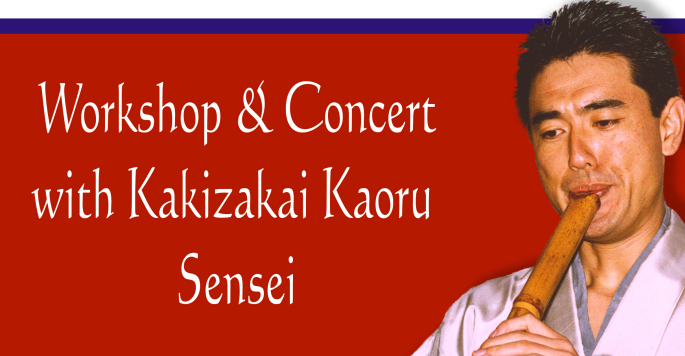 The Japanese Garden will fill with the sounds of Shakuhachi, Japanese end-blown flute and Koto, a Japanese stringed instrument in an interactive concert, as musicians perform and provide the cultural background to the music played and their instruments.

This is Takako Nishibori on koto and me on shakuhachi.  We are part of Garden Vibes.  The complete program, all at the Japanese Gardens is:

The other event doesn’t include me, as I’ll be in Tasmania, but there will be music and other activities.

Journey into Japan at Kisaragi-Sai in Roma Street Parkland. Celebrating the many facets of Japanese culture and society, Kisaragi-Sai features traditional food stalls and activities including music and dance, contemporary street performers, bonsai demonstrations and Aikido, as well as origami workshops, an ikebana display and Kamishibai storytelling with Ellie the Eastern Curlew.

Kisaragi-Sai will conclude with Brisbane Asia Pacific Film Festival screening Your Name in the amphitheatre at sundown.

More information on BrisAsia at:

At Brisbane Botanic Gardens, Mt Coot-tha (Bandstand) from 1-3pm. I have a short spot accompanying the aikido group, as I did last year. The schedule I have so far is:

This event is Takako’s student concert in the beautiful St John’s Cathedral. The first half of the program will be Takako’s students, accompanied sometimes by me. The second half will be Takako and Ikuko on various koto and me in various shakuhachis, Laurie and me for Shika no Tone, and the grand finale with almost everyone.

I’ll be playing at the Kumamoto charity festival sometime between 10 and 11am. The plan at the moment is to alternate shakuhachi and koto solos with Takako.

I’ll be playing at the Kumamoto charity festival sometime between 10 and 11am. The plan at the moment is to alternate shakuhachi and koto solos with Takako. 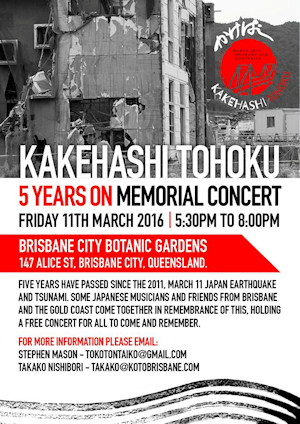 Shakuhachi and koto with Carl Rathus and Takako Nishibori
When: Sunday, February 7, 2016, 11am – 12pm

‘INTIMATE’
Koto and Shakuhachi Concert
of Japanese Music
(a JCC event)
֎ Indooroopilly Library Meeting Room
(after hours entry from car park)
֎ Friday November 13th
֎ 7:30 pm – suggested $10 donation
Carl and Takako have both been playing traditional Japanese music for over 30 years.
Fresh from performing at the Masters concert of the Australian Shakuhachi Festival, and at Utamono at BEMAC, they are ready to entertain and beguile with duets and solos from the ancient to modern originals.
Two of Carl’s senior students, fine musicians in their own right, Laurie Gaffney and Chris Golles, will also perform with Carl.
Come and join us for an evening of unforgettable music

ASF2015 is just around the corner.  Our 3 favourite Japanese teachers are coming to teach and perform, as well as Christopher Blesdel, long term resident in Japan.  The usual suspects from Australia will also be there.  The Masters concert on Saturday will be a highlight. 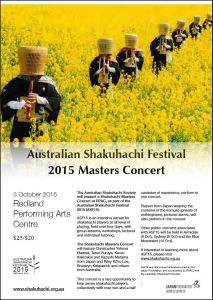